The Wiley Ford Church of the Brethren
Prior to 1927 the United Brethren had been having Sunday School and church services in the old schoolhouse. After the old schoolhouse in Wiley Ford burned down further meetings were suspended.
With the Old Furnace Church of the Brethren growing and expanding in the 1920’s many members were living in the Wiley Ford area. Elder A. J. Whitacre was asked to take over the church services in Wiley Ford, which he did. He had already sold his farm in Short Gap, WV and moved to Wiley Ford in 1924. On April 22, 1927, a Sunday School was organized with D. W. Tusing as the first Sunday School Superintendent.  J. E. Whitacre held a revival service in the Dixie School in 1929 and twenty-nine were baptized. The church suffered a great loss when some of the Whitacres moved out of the area in the early 1930’s.
For a few years until 1937 the church went through very discouraging times and some urged that the work here be given up. Only with the faithfulness of Brother D. W. Tusing did the work survive.
In 1937 Rev. Vernon Shanholtz moved into the community and in 1938 D. W. Tusing was selected as pastor. More members began moving into the community and the church began to grow. 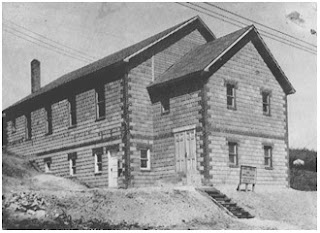 “Wiley Ford Church of the Brethren”

As the membership increased permission was granted to erect a building. The basement part of the church was erected in 1938 and dedicated on December 18, 1938 by C. O. Showalter who was then elder of the Old Furnace Church congregation. B. W. Smith held a revival meeting after the dedication and three were baptized. The new church house was now fueling the congregation to real growth.
A petition was placed at the district conference for a committee to meet with them at the Old Furnace Church to become a separate congregation. This was granted and on December 1, 1940 the congregation became “The Wiley Ford Church of the Brethren”. Elder C. O. Showalter was voted in as elder-in-charge of the Wiley Ford congregation and Amos Lambert was voted as church clerk.
Before growth started in 1937 the membership was only twenty one. At the time the group became a church they had grown to one hundred members. Sunday school enrollment had also doubled. The old debt of the basement church was now paid off and the second story of the church was completed in 1942. A double story vestibule entrance was added with stained glass windows portraying the life of Christ. A baptistery and Sunday school classrooms were included. The main sanctuary had a seating capacity of one hundred seventy-six. This completed structure was dedicated on April 19, 1942 by A. R. Showalter.
With Vernon Shanholtz as pastor, A. W. Showalter as elder-in-charge and many faithful members The Wiley Ford Church of the Brethren was now leaving its mark on the community.

Old Furnace Church Expansion
In April 1936, a council meeting was held to discuss the need for expansion of the Old Furnace Church building. A building fund and a building committee were formed. At a special council meeting on August 29, 1944, the decision was reached to build a new brick church. A shortage of building materials dictated the tearing down of the old church building and the use of some of the timbers in the new church. Services were held in the Short Gap School during the summer of 1945 as construction progressed. The building was ready for use on December 23, 1945 and Brother Charles Whitacre preached the first message. Brother Charles E. Ellis delivered the dedication sermon on Sunday, May 5, 1946. As reported by the church treasurer, Charles Bohrer, it was necessary to borrow only $2000.00 for construction. The total cost including donated labor was $9,965.12.
Through the early years those who served the church in free ministry were: B. W. Smith, John K. Baker, D. B. Arnold, Benjamin Leatherman, Martin Biser, William Bane, Raphel Leatherman, Thomas Digman, John Parrish, Emmer Lechliter, A. J. Whitacre, D. W. Tusing and Charles Victor Self. 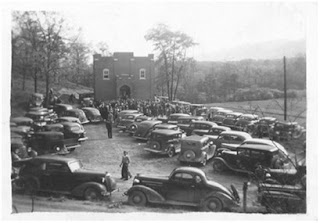 New Brick “Old Furnace Church of the Brethren” Building
Dedication Day 5-5-1946
In the early 1950’s a parsonage was built on the property to house pastors. Ira L. Abe, with the help of volunteers, built the house for $9,500.00 and it was dedicated in 1953. H. W. Peters was the first pastor to occupy the residence. Brother Peters came to the congregation from Leaksville, N. C. and served for three years. On September 23, 1956 he preached his final sermon and the parsonage mortgage was burned. 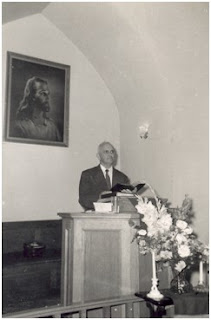 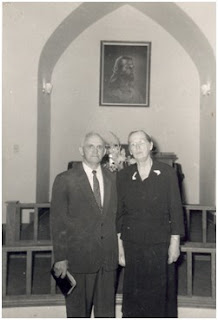 Brother and Sister H. W. Peters
The next thirty and some odd years brought many improvements and projects. The original lot consisted of only one acre. In 1956 a four acre tract of the Furnace Acres Housing Development (formally the William Edward Abe property) was deeded to the church by Carl Abe and Burlie Ault for the sum of $10.00. In the late 1950’s $22,500.00 was borrowed to add classrooms. Construction was begun and finally dedicated on April 23, 1961. This mortgage was burned on May 28, 1967 with Brother Owen Stultz bringing the sermon.
The church parking lot received a coat of blacktop in 1968 and the sanctuary was air-conditioned.
In 1970 stained glass windows were donated in memory of loved ones and the kitchen was remodeled at a cost of $3,500.00 in 1973.
A small strip of ground adjacent to the church later became available and in 1975 the Church Council gave permission to purchase the property from the Delozier family. The church property now consisted of six acres.
The fellowship room was enlarged in 1978 to accommodate about 100 people. Bathrooms were also relocated and enlarged.
In 1987, new lights and ceiling fans were donated and installed by volunteers. A new organ was purchased in 1988 and a new piano was donated to the church. An air-conditioner was donated for the fellowship room. Carpet was also laid in the Narthex and the downstairs.
Missionaries in Haiti and Japan were supported over the years. Services were held once a month at the Cumberland Union Rescue Mission. The outreach budget of the church grew from $155.00 in 1936 to $44,792 in 1989.
The influence of The Old Furnace Church of the Brethren continues to this day in both the community and the world. Members of the Abe Family who settled in the Old Furnace Road and Wiley Ford areas played a big part in the establishment of both churches as well as their future growth. 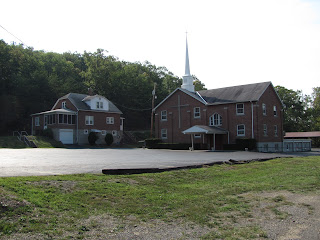 Old Furnace Church of the Brethren and Parsonage
9-24-2010


Pastors Who Served the Old Furnace Church of the Brethren

Those Called To The Ministry From Old Furnace


Information and some pictures were taken from:
(62) “A History of the Church of the Brethren in the First District of West Virginia” By: Foster Melvin Bittinger, Publisher: Brethren Publishing House, Elgin, Illinois
“75th Anniversary Celebration” pamphlet dated October 29, 1989


Emmor Lichliter - Not related
Listed as a farm labor for Nicholas Abe who was the father of Jacob and John Adam Abe
(15 year old living and working on the farm in 1880).
Burlie F. Ault – not directly related
(his daughter is married to my third cousin Richard Melvin Abe)
Posted by Michael Abe at 12:28 PM