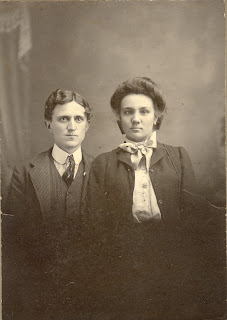 Sophia Jane was the sixth child of John Adam and Martha Jane (Moreland) Abe. She was (6)born on August 2, 1887 at the farm in Little Cacapon, West Virginia and is shown with the family through the (70)1900 Census for Hampshire County, WV.
In (71)1910 her family has located to Mineral County, WV. At this time (129)(37)Sophia has married to Hanson John Jacob Senn and is living next door to his parents on the Old Furnace Road. They have been married for four years and have three children. Their (197)marriage is recorded as February 21, 1906 and took place at the home of her parents, John Adam and Sarah Margaret Abe.
Her husband was the son of John and Sarah Virginia (Bucy) Senn and was born July 13, 1882 in "Plum Run". In the marriage record of 1906, John Adam and Sarah Abe are also listed as living at "Plum Run".

This "Plum Run" seems to be an unofficial and loosely named area of Mineral County by locals. No records have been found that officially explain the exact boundaries of what is referred to above as "Plum Run". Records that do mention it seem to make it a area of quite a few square miles across. It seems to cover an area just north of Short Gap (where a stream called Plum Run and a road called Plum Run Road still exists today) northward to the Old Furnace Road area and East along the Old Furnace Road to at least the area of the Old Abe Farm where the Abe Cemetery is now located. It may also extend as far East as Patterson Creek. In this instance, the Senn Farm is along the Old Furnace Road near the original Abe Farm.
It is unknown if "Plum Run" extended northward along Route 28 toward Wiley Ford. Was John Adam living near or on the Abe Farm on the Old Furnace Road in 1906 or was he living near Ridgeley, WV as he is listed in the 1910 Census?
The 1910 Census refers to John Adam living along "Knobley Road" with pages before and after listing streets in Ridgeley, WV.
The (6)"Abe Family Heritage" book says that John Adam "purchased the home place from his brother Jacob, lived there for several years and then sold it to John Senn before moving to Ridgeley, WV". This could place John Adam on the original home place during the time period of Sophia Jane's marriage. The book further states under Sophia Jane's biography that "they settled on the home place for their entire marriage". It is still unclear if John Senn the father originally purchased the home place from John Adam or if it was Hanson John the son. At this time I have no land records to support this. From this it would seem that at some time between 1900 and 1910 John Adam and family were on the Abe Farm Home Place for a short while. 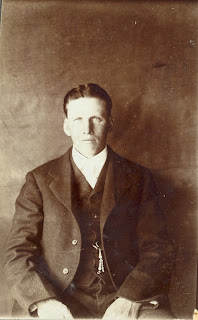 The only other records found for Hanson and Sophie (Abe) Senn are a (198)WWI and (198)WWII Draft Registration Records for Hanson. The (198)WWI record, dated Sept. 12, 1918, lists him as a self-employed farmer in Mineral County but for some reason the contact address for both Hanson and Sophia is listed as "Station A, Cumberland, MD". This is the second time a (107)family member has been listed at this address during the WWI time period and I have still not been able to determine exactly where this is. My best guess would  possibly be the Queen City Station in Cumberland, MD. It just seems strange that they would be renting rooms in Cumberland, MD when they had a farm just across the river. It is possible Hanson had a temporary job in Cumberland and made it easier if he rented to be closer to that job.
The (198)WWII record, dated April 27, 1942, lists their address as Patterson Creek, WV which is most likely the Old Furnace Road farm.
The (6)Abe Family Heritage book lists the (6)death dates for Hanson as August 29, 1942 and Sophia (Abe) Senn as March 30, 1948. I have not found any death or burial records for either so if anyone has any further information on this please let me know. I would like to find their burial place.
Hanson's parents, John and Sarah Senn, are buried at the Abe Cemetery.
It is possible that Hanson and Sophia are buried at the Abe Cemetery in unmarked graves. It would be strange if they lived all their married life on the farm and were buried somewhere else. Especially since both of their parents are buried there. Another little note for thought on this is, records show a son, (13)Clarence Rufus Senn is buried in the Abe Cemetery. His grave is unmarked. Could Hanson and Sophia be buried in unmarked graves also?

UPDATE: George Funeral Home records have been obtained which state that Hanson John and Sophia Jane are buried at the Abe Cemetery. No location in the cemetery is mentioned. They would be in unmarked graves as no markers are present. A John C. Wolford Funeral Home ledger record also places a son, Clarence, at the cemetery. Also, no marker has been found for him. See the "Unmarked Graves" tab at the Abe Cemetery web site for the records. If anyone knows the location in the cemetery where they are buried, please let me know. 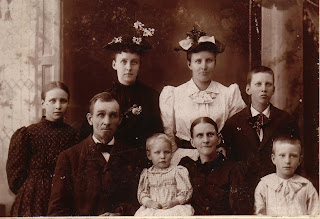 Posted by Michael Abe at 6:32 AM No comments: