There isn't much further I can expound upon these three children that has not already been provided in the post "John Adam Abe.....Family Man (part 2) 10-019". As I am trying to keep the information in some sort of order we will do a review of what we know of each. The records available will also be added under the "Sources" for your review.
On (50)October 3, 1876, about 27 months after the death of his first wife Margaret, John Adam remarried to Martha Jane Moreland. Pieced together information shows that the couple had three children that died at birth or shortly thereafter.
An initial clue to their existence was found at the Abe Cemetery. The right side of John and Martha's monument has three children recorded. To the right of the monument can be found four actual graves. All are marked with just a footstone style marker. The first marker has no inscription visible. This is believed to be the unnamed child of John Adam and his first wife Margaret. (Refer back to the post "Martha Ellen Abe 11-012" for further on this child. Next to this grave are three other markers with initials that match up with the names of the three children on the monument.
The first born child to John Adam and Martha Jane was (13)"Our Babe". This child apparently died shortly after birth as no official name is listed on the stone or in records. (13)Birth and death on the stone are listed as 1877. (187)A birth record for Mineral County, West Virginia lists an "Abe, female" child born to Adam and Martha J. Abe in July 1877. No day is listed. A death record for the same "Not Named" child says the child died on July 19, 1877. The cause of death is listed as "unknown" so I believe the child's death was for some other reason other then "childbirth" or "stillborn" as are listed for other children in the same record. Death was most likely very soon after birth, with the child being unnamed.
The second child of John and Martha is listed on the (13)monument as "Ella M". Birth and death on the stone is listed as 1878. No actual birth record has been found. The only record found is an (187)1878 death record where she is listed there as "Martha E.". The month and day in the record are unreadable but the year is 1878. Her cause of death is also listed as "unknown". *(see update below)
The third child listed on the monument is named "Emma". She was the fourth child born to John and Martha in 1881. No birth records have been found for her. A (187)death record from Hampshire County, West Virginia and says she died on October 6, 1881 at the age of just over one month.  Her death cause is also listed as "not known". One confusing thing about this record is why the child was listed as born and died in Maryland and the death was recorded in West Virginia.

*UPDATE: (187)A birth record for for the second child, "Ella M." or "Martha E." has been found. The last name is misspelled as "Abbee". The birth is listed as September 1878 with no actual day. 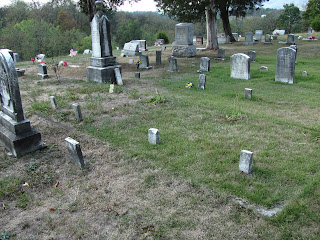