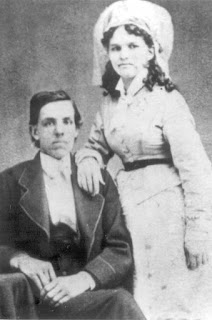 Jacob and Mary (Buser) Abe
Jacob Abe was born (6)(24)July 19, 1855, the son of Nicholas and Lacy Ann (Long) Abe. No listing for a middle name has been found. Jacob grew up helping his father and brothers farm the home place.
(6)At the age of 12 he nearly lost his life by eating too many green apples. Sadly his two younger sisters, Sara and Virginia, did die from the same incident.
On (64)January 4, 1876, at the age of 19, Jacob married Mary Buser, (6)(24)(67)born May 16, 1859. Mary was the daughter of Peter and Mary A. (Senn) Buser and was born in Switzerland. She was about ten years of age when her parents (24)(65)immigrated in the United States in 1869. She became a (65)naturalized citizen in 1895. (6)Thirteen children were born to them: Samuel Tildon, William Edward, George Washington, John Adam, Amos Adam, Norman Elmer, "F.", Jesse Cleveland, Ira Lee, Ida Elmira, Nora Mae, Olive Amelia and Clarence Raymond.
In 1894, when his father Nicholas Abe passed away, one half of the Abe Farm was (8)willed to him. The other half was given to his older brother Frederick. They shared the farm for a number of years.
Jacob was the first person (62)(63)baptized into “The Old Furnace Congregation” (February 1896). The baptism was most likely performed by Elder B. W. Smith, a pioneering minister from the Beaver Run Church of the Brethren. It took place in the Little Cacapon River on his brother, John Adam’s farm.
On (62)(63)August 10, 1912, Jacob was selected to be on the committee to choose a site for the first church building. He made an offered to donate a piece of land and the committee accepted it to build the new church building. The land was located across the road from the old iron furnace. (see The “Vulcan Furnace” 10-013).
(65)At this point Jacob is not living and farming on the Abe Farm in 1910. The (63)“Allegheny Passage” says that his farm was near Fort Ashby, WV during the summer of 1913.  He spent most of that summer in the construction of the new church building while his wife and children tended the farm. The place where the chapel was built was originally part of the August Abe farm. It is possible that Jacob purchased this donated portion of property from the August Abe estate in 1898.
Jacob died on (6)February 24, 1929, at the age of 72. No death records have been found for Jacob. He was buried in the (13)Abe Cemetery. His wife Mary died on (67)February 26, 1945, at the age of 85. She was buried in the (13)Abe Cemetery on (67)February 28, 1945.
One final interesting bit of information from the (6)“Abe Family Heritage” book is that Jacob and his brother, Frederick, died on the same day and that Frederick died two hours after Jacob.

Children born to Jacob and Mary Abe are: 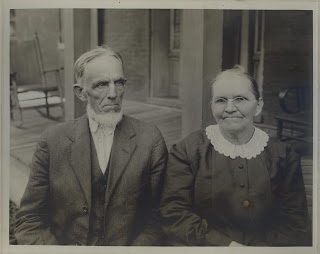