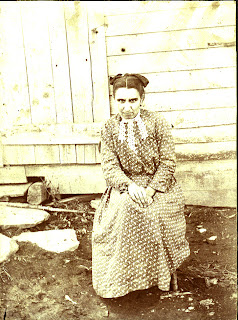 Virginia (70)"Jennie" Lee Abe was born the third child of John Adam and Martha Jane (Moreland) Abe. Her (188)birth record shows she was born on November 27, 1879 in Mineral County, West Virginia. Her parents were living and farming along Route 28 just north of the Old Furnace Road, possibly what is now the Miltenburger Farm.
"Jennie's" life started out as any other child who was born into farm life, but at an early age her life quickly changed. The (6)"Abe Family Heritage" book has a quote from Nora (Largent) Stotler, her cousin, that after a long walk to visit her grandparents she suffered paralysis in her legs. There are no records to prove it nor do we know exactly when this happened, but it is likely that she suffered from a case of polio. During this period in history there were no established methods of treatment for this disease and in many cases doctors were not readily available.

Poliomyelitis was a worldwide epidemic for the time period between the middle 1800's to the 1950's when a vaccine was developed. The viral disease is spread by direct contact and is absorbed into the system through the nose or mouth, multiplies in the throat or intestinal tract and then spreads to the blood, lymph glands and even the nervous system. The infection period, of from 5 to 35 days, can manifest itself as anything from just cold and flue-like symptoms to partial or full paralysis that usually is permanent or even death in extreme cases. Even today, the only thing that can be done once infected, is to treat the symptoms till the virus runs it's course. In severe cases breathing problems would have to be addressed if the spinal cord and brain become involved. These breathing problems were handled by a "negative pressure ventilator" machine commonly known as an "Iron Lung" although it did not come into use until the late 1920's.


From the point of recovery on, she would spend her life as a handicapped person. There were no provisions for getting the handicapped back and forth to school (almost all had to walk to the local meeting place) so she never learned to read or write. Parents, in most cases, couldn't help as they were either running a farm from daylight till dark or couldn't read or write themselves. "Jennie's" not being unable to walk severely limited what she would be able to do around the farm. Depending on how severe the paralysis, she may have had some sort of makeshift crutches to get around the house. No fancy wheelchairs or scooters here. She could have, in limited ways, helped out with cleaning, cooking and sewing. She could never be able to be out on her own to make a living. For the rest of her life she would have to depend on others for life's necessities.
"Jennie" travel through life mirrored that of her father's until his death in 1914 so there is nothing more that  can add there. Her mother would pass away in 1890 when "Jennie" was about eleven years of age. About seven years later, in 1897, her father remarried to Sarah Margaret Sowers. At some point, in the six years after her father's death, her stepmother moved back to Hampshire County, West Virginia. She is found in the household of her sister and mother in the (72)1920 Census. "Jennie" is not there with them. It is unknown if Sarah was unable to care for her stepdaughter any longer or if she just did not want the responsibility any longer.
The above quote from Nora (Largent) Stotler in the (6)"Abe Family Heritage" book further states that there came a time when nobody was able to care for "Jennie" and she was put in a "home". This would have been the time period's version of welfare or assisted living center. In this case it would have been the Mineral County Poor Farm. Poor farms were set up by and through taxes to help those with no means of support for themselves. Individuals were assigned work duties to perform in return for room and board. Most of the poor farms were actual working farms that the residents would tend. From this point on there are no records known that give a glimpse of her life there. It is also unknown when she died or where she was buried. Many unmarked graves are located on the property of the "poor farm" so it is likely she was buried there.
Posted by Michael Abe at 8:49 AM