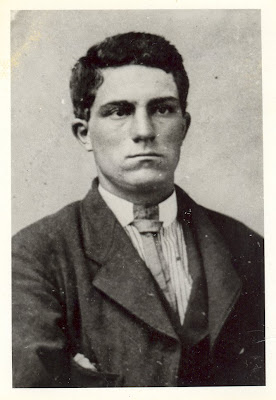 John H. Abe was born the son of Nicholas and Lacy Ann (Long) Abe. A (60)family photo lists his birth as March 25 1853, but I have not been able to confirm this with other records. There are a number of unknowns for him found in records.
In the (3)1850 Census a son "John Abe" is listed with Nicholas and Lacy Ann (see post John Abe...The Unknown John 10-022). He was listed as one year of age which would put his birth about 1849. I will let you draw your own conclusions, after reading these two posts, whether or not John Abe and this John H. Abe are the same person.
As for this John H. Abe there seems to be some discrepancy about his birth year. The (4)1860 census places his birth year as 1853. The (5)1870 census places his year of birth as 1854. The (55)1900 actually lists his birth year as 1853. The (56)1910 census places his birth year as 1853. (6)“The Abe Family Heritage”  book says 1850 and his cemetery (13)headstone says 1850.  A (60)picture from the family has a birth date on it of 1853. (6)“The Abe Family Heritage” book most likely got it’s information from the cemetery. The (5)1870 census age was most likely recorded wrong by one year (a very common occurrence).
On (61)October 19, 1875 John H. married Mary Elizabeth McKenzie (marriage record lists her name as McKensey). He is listed as age twenty two and she as age twenty. Both are from Mineral County, West Virginia. (52)Rev. H. C. Holloway of the Kingsley M.E. Church performed the ceremony. Thirteen children were born to this union: Sarah Catherine, Martha Jane, Daniel, Rose M., Nicholas M., Harry Irland, Emily Laura Virginia, Jerry, Charles, Elmira, James, John, and an unnamed child. (55)(56)Charles, Elmira, James, John and the unnamed child died at birth or as infants.
The (54)1880 Census shows another interesting bit of information. He is listed in two places. On June 5, 1880 he is listed as a foreman laborer on a farm. He is listed living among a number of other laborers. He is 27 years of age which would make his birth year as 1854. It say that he was unemployed for six of the previous 12 months. Apparently he has taken a farm job to make ends meet. On (53)June 10, 1880 he is also listed as living on Greene Street in Cumberland, Maryland with his wife, Mary and two daughters Sarah and Martha.
In (57)1895 and 1896 John was living at 32 Thomas Street in Cumberland, Maryland. His occupation is listed as a "heater". It is unknown exactly what this job was.
In (58)1897 he has moved to the rear of 23 Oldtown Road in Cumberland. His occupation at that time is listed as a fireman.
In the (55)1900 Census John and Mary have now been married over twenty five years. Children listed here with them are: Martha, Daniel, Rosey, Nicholas, Harry, Emily and Jerry. The census also states that they had a total of 13 children but only eight of them are still living.
The (56)1910 Census lists John and Mary with three children living at home. They are Harry, Emily and Jerry. This record also says that there were 13 children with eight still living. We can now say that five children died at birth or very young as none of them have shown up in any census record. John's last name is recorded here as "Abbe" and the family is living on Virginia Avenue in Cumberland, Maryland.
In (59)1913 John is living at 1102 Lexington Avenue in Cumberland, Maryland and he is listed as a laborer.
John died on (60)November 18, 1918 at the age of 68 according to the above mentioned family photo. Mary Elizabeth died (60)February 4, 1922 at the age of 70. The death date on Mary’s cemetery (13)headstone also seems to have been carved wrong. It reads 1920. Both are buried in the (13)Abe Cemetery. 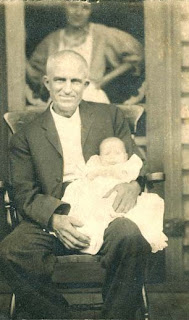