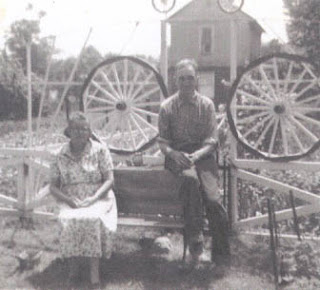 Clayton Abe was the eleventh child born to Philip and Annie Elizabeth (Largent) Abe. He was born on (157)(159)June 24, 1894 in Mineral County, West Virginia and spent his younger years working on the family farm along the Old Furnace Road. His (157)WWI Draft Registration card says he was still working on his father's farm.
He was inducted into the (158)Army on September 4, 1918. At the age of 23 (10/1918-3/1919),  he served with the Army in Europe at the tail end of the war. Actual fighting ended on November 11, 1918 with the signing of the armistice and he was discharged on March 28, 1919.
After the war, Clayton apparently decided not to go back to the farm and struck out on his own. By (153)January 15, 1920 he has moved to Cumberland, Allegany County, Maryland (possibly 157 Maryland Avenue). At age 25, he is listed in the (153)1920 Census as a boiler man for the Baltimore and Ohio Railroad. The (154)1930 Census also confirms this employment.
A little over a year and a half later, on (6)September 15, 1921, he married Bernice Katherine Buckley. She was the (155)(156)daughter of John and Jane Buckley who were living on 23 Chestnut Street and 120 Potomac Street in Cumberland, Maryland in 1910 and 1920. The (154)1930 Census lists Clayton and Bernice residing at 252 Elder Street in Cumberland, Maryland. This is just three blocks from where she was living on Potomac Street in 1920. By this time they have four living children; Lawrence Wilber, John Philip, Robert Llewellyn, and Aden Ambrose. A fifth child, Norman Loy, was born and died in 1929 according to his headstone in the (13)Abe Cemetery. The (6)"Abe Family Heritage" lists the date as 1928. I have no death records to support either.
In (157)1941 Clayton is still working for the B and O Railroad and living at 252 Elder Street. His employer is listed as the "Roundhouse" for the B and O Railroad on his WWII Draft Registration Card.
Clayton (160)retired from the B and O Railroad and was a member of the Brotherhood of Railroad Boilermakers Local 332.
Bernice's (161)obituary says she died on May 17, 1962 at Memorial Hospital in Cumberland, MD after a five week stay. She was buried at St. Luke's Cemetery in Romney, Hampshire County, West Virginia.
Five years later, on June 4, 1967, Clayton (6)married Clara L. Lashley. She was the (162))163)daughter of Lorenzo Dowe and Amy Catherine (Shriver) Lashley. She grew up in the area of (162))163)First Street and Arch Street in Cumberland, Maryland.
(160)Clayton's obituary says he died on September 29, 1976 at Sacred Heart Hospital in Cumberland, Maryland. He was buried at the (13)Abe Cemetery and not with his first wife, Bernice, in Romney, West Virginia even though his name is inscribed on the headstone there.
The (164)Social Security Death Index says that Clara died on November 8, 1996 in Cumberland, Maryland. It is unknown, at this time, where she is buried.