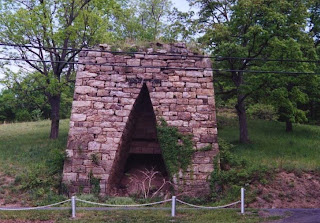 In the deed for property transferred to "Gustus" Abe from Joseph Pancoast and his wife Rebecca, we find the following excerpt:

"...more or less Reserving the right of user of land on which the Furnace building is erected, and the Steam Engine and Boilers, and fixtures are located and being; to the Extent of one acre of ground alone measured and laid off around said furnace, Engine, Boilers and fixtures, including as part of said acre the land on which the same are located and erected; until the same are removed or taken away, at the option of said Joseph Pancoast and his assigns, and with the right to remove and take away the same at pleasure. Together with all and singular the covenants, hereditaments and appertinances thereto belonging, or appertaining ---- and the said Joseph Pancoast covenants that he will warrant specially the premises hereby granted and sold, to said Gustus Abe, his heirs and assigns, in fee simple."

The furnace, steam engine, boilers and fixtures mentioned in this deed were the remnants of an era of manufacturing that pretty much had come to an end, at least in this particular design. It's large triangular shaped mouth and huge stone construction still stands majestically against the bank as a monument of that era. It sits about 100-150 yards off of Route 28 on the Old Furnace Road near Short Gap, West Virginia. This particular furnace became the namesake of the Old Furnace Church of the Brethren and the remnants and ground on which it stands are owned by the church across the road.
The book "History of The Manufacture of Iron In All Ages" by James M. Swank, (published in 1892) mentions this furnace. Here it was called the  "Vulcan Furnace". These furnaces designed to produce pig iron were originally fired by charcoal and then bituminous coal. This furnace began using coke in the process about 1858. The bituminous coal most likely was hauled in from the Frostburg, MD area where large quantities of the product was being mined.
Coke is usually produced from coal; the process is called coking.
Volatile constituents of the coal including water, coal-gas, and coal-tar are driven off by baking in an airless furnace or oven at temperatures as high as 2,000 degrees Celsius. This fuses together the the fixed carbon and residual ash. Most modern facilities have "by product" coking ovens. Today, the volatile hydrocarbons are mainly used, after purification, in a separate combustion process to generate energy. Non by-product coking furnaces or coke furnaces (ovens) burn the hydrocarbon gases produced by the coke-making process to drive the carbonization process.
Bituminous coal must meet a set of criteria for use as coking coal, determined by particular coal assay techniques. These include moisture content, ash content, sulfur content, volatile content, tar, and plasticity. The greater the volatile matter in coal, the more by-product can be produced, but too low or too high a level of volatile matter in the coal results in inferior coke produced in respect to coke quality properties. It is generally considered that levels of 26-29 % of volatile matter in the coal blend is good for coking purposes. Thus different types of coal are proportionally blended to reach acceptable levels of volatility before the coking process begins.
Coke is used as a fuel and as a reducing agent in smelting iron ore in a blast furnace. Since smoke-producing constituents are driven off during the coking of coal, coke forms a desirable fuel for stoves and furnaces in which conditions are not suitable for the complete burning of bituminous coal itself. Coke may be burned with little or no smoke under combustion conditions, while bituminous coal would produce much smoke.
It is uncertain exactly when this "Vulcan Furnace" discontinued production but it appears that it's manufacturing life was over by December 1868, when the property on which the furnace sat was sold off to Gustus Abe.
Posted by Michael Abe at 8:25 AM