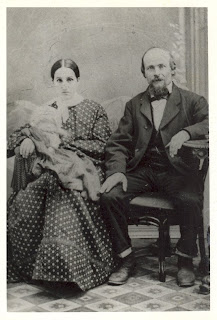 Mary Catherine Abe was born on (6)(13)June 1, 1851, to Nicholas and Lacy Ann(Long) Abe. All her life she lived on or near the Abe home place. There isn't a whole lot about Mary Catherine's life that has been found. Most census records list her as a housekeeper. There seems to be a little more information on her husband. No actual birth or death records have been found for either.
On (49)August 22, 1867, at the young age of 16, she married 32 year old John Adam Herrick. John Adam was born on (6)(13)February 28, 1835 in (5)(17)Hesse, a state in (25)Germany. His (13)headstone says he came to the United states in 1854 although the time and place of his emigration to this country has not been established. He is listed as a carpenter on the (5)1870 census and on their (49)marriage record. From the (17)(46)(47)1880 Census on he is listed as a farmer.
Twelve children were born to this union: an unnamed infant, Nicholas, Anna Elizabeth, Magdalene, Mary Jane, Josephine, William, Elmira Martha, Amanda May, Adam, Lillian Catherine and Daisy.
The (5)1870 Census lists John Adam and Mary Catherine with a one year old son Nicholas. An interesting find here is that a nine year old Emma Buser is living in the household. Emma is the sister of Mary Buser who married Mary Catherine's younger brother Jacob. It is unknown why she is living in this household, but Emma's sister Mary can be found (on the same page of the census) living nearby with the family of John and Sara House. For some reason this Buser family seems to have been split up. I will have to research further on the parents and for the location of any of the other children.
The (17)1880 Census lists a 25 year old Joseph Orndorff living in the household as a farm hand. Nicholas is now deceased. Annie, Magdalene, Mary Jane and Josephine are listed. The others are not born yet.
One reference for Mary Catherine can be found in her (7)father's will that gives her a $200.00 cash settlement from the estate. It was to be paid to her over three years by her brothers, Frederick and Jacob, because of them receiving a split of the Abe Farm.
Her Uncle Gustus’ Abe's (18)will gave her an equal settlement of his estate with her brothers. No record of the cash settlement is known.
Mary Catherine died on (13)June 10, 1907 at the age of 56.
John Adam died on (13)April 6, 1921 at the age of 86.


The following are photos of a (48)German Language Bible that John Adam carried with him during The Civil War. They show the cover, title page and the first page of the "Book of Matthew". A certificate glued to the inside cover reads:


Bible House, Baltimore
__________________186"3"
From the Maryland State Bible Society
to "John A. Herrick" soldier in
Comp'y "D  2" Reg. "Virginia" Vol'es.
Should I die on the battle field or in
Hospital, for the sake of humanity, acquaint
"my Cousin Nicholas Abe" residing
at "Cumberland Maryland"
of the fact, and where my remains may be found.

Note: The words in quotation marks are handwritten in with a pencil. The "Cousin Nicholas Abe" mentioned, is actually his future father in law. It is unknown why he would be the contact person or why he is referred to as "Cousin". Also keep in mind, his future bride was only twelve years of age at this time. More confusing is this "Cousin Nicholas Abe" is supposed to be living in Cumberland, MD when he was operating a farm on the Old Furnace Road in Mineral County, WV. 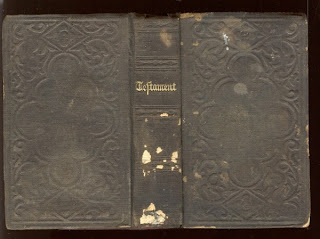 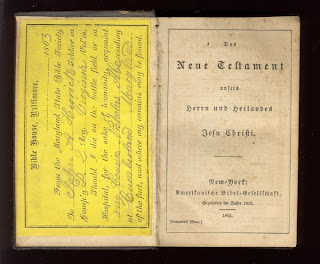 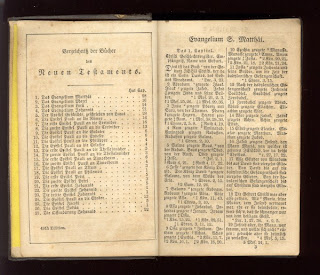 UPDATE:
New records and information on John Adam Herrick in the Civil War can be found in the post "They Abandoned the 77th Virginia Militia 11-004".  Also see Record # 0136 for more on his membership in the 2nd Virginia Infantry.