When Philip purchased the plot of land next to his old home place you can just imagine the excitement that comes with owning your own property. I am sure there was a lot of hard work ahead for them from clearing the land and building a house and barn to planting and harvesting crops. Their sixth child Harmon Seefers was born there in September of 1887. They were well on the way to a full and happy life.
Sadly two years later, after the birth of the seventh child Alfred, family tragedy began to strike. Alfred died of whooping cough at the age of one month. Two years later their eighth and nineth children, Walter T. and Morris (Maurice is listed on his headstone), died of Brain Fever (most likely meningitis or encephalitis). Walter was two and one half and Morris was one month old. They died within eight days of each other. A tenth child, Gertrude, died at the age of one month a year after that. It is unknown what caused her death. They all were buried in a small plot on the farm.
I haven't found any records on them but two more children, Florence I. and Bessie May are also buried there. They were Philip and Annie's fourteenth and fifteenth children. Almost all information on the headstones is unreadable. I was able to read Florence's death date as September 6, 1901.
Annie Elizabeth (Largent) Abe was buried there after her death on April 27, 1914. Philip followed after his death on April 29, 1920. The last of the family buried there was Harmon Seefers in 1939. What's interesting is that he was also the first child born on the farm. Photos and inscriptions are as follows: 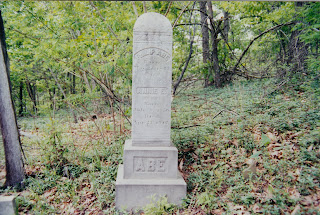 Their toils are past,
their works are done.
They fought the fight,
the victory won.

(Inscription on monument base lists J. B. Williams Co., Cumberland, MD as carver.)
The headstone is about 5 foot tall. The inscription is as listed above. The stone sits in the center of the cemetery in the back. Philip is buried on the left of the stone monument and Annie is on the right as you face the front of the monument. To the left of Philip’s grave is a son Hermon Seefers. 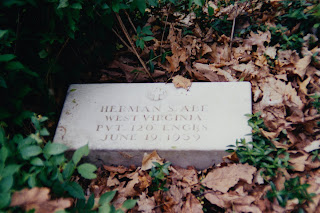 HERMAN S. ABE
WEST VIRGINIA
PVT. 120 ENGRS.
JUNE 19, 1939
(For some reason the stone was carved wrong.
It should be Harmon instead of Herman.)
In front of the above stones the following are from left to right:

Bessie M.
xxxx xx
Born
(Inscription is on top of the square block stone.)
Florence I . and Bessie M.’s headstones have the inscriptions on the top of a square block. This has made them susceptible to the weather and wear is considerable.
The cemetery can be located  between 100 and 150 yards from the house at the end of the road. It is located to the right of a very deep gully and to the left and below the revenants a barbed wire fence. The cemetery is about half way between the house and a road that circles from the house on the left side straight down and then around to the right below the cemetery. It is easier to find by following the road to the left of the house and coming up to the cemetery from the bottom. A GPS device is recommended.