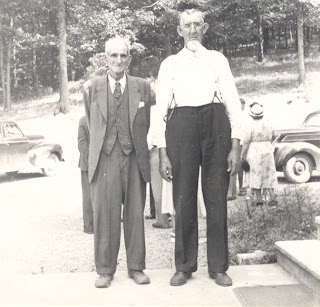 Issac Franklin "Frank" Abe was born the third child of John Adam and Margaret G. (Fulk) Abe. No birth record or birth certificate has been found, but other records give a few bits of information on his birth. The (17)1880 Census lists his age as 9 in June of that year. The (175)1910 Census lists his age as 39 in the month of April. In the (174)1900 Census says he was born in August of 1870. His (176)death certificate and the Register of Deaths for Hampshire County, WV lists his birthday as August 29, 1870. Both death records list the place of birth as Patterson Creek, WV which would be in the area of the Abe Farm where his father was raised. In the (69)1870 census his parents are living in Cumberland, Allegany County, Maryland one month before his birth so it is possible his mother was moved to the Abe Farm to have her child. The farm was only 9-10 miles away. John Adam was working for the Baltimore and Ohio Railroad at the time so he would need help as Margaret neared the time to give birth.
When John Adam left the railroad and started farming for a living and this would set the stage for Isaac's life in farming. His parents farmed for a while in Mineral County before purchasing a farm in the Little Cacapon area of Hampshire County.
About 1893 Issac Franklin (174)married Margaret Arsylva Kerns. I haven't completely confirmed it yet but I believe her parents are Frederick (or Tedrick) L. and Mary E. Kerns who lived in the same area of Hampshire County. The (174)1900 Census says "Frank" and "Arsylva" have been married for seven years. At that time they are living in the household of John R. and Mary A. Burnside. The Burnsides are listed as in their 60's with no occupation and no children. Isaac is listed as a farmer so he is apparently operating the farm. By this time they have two daughters and two sons ranging from age 5 to 1. Later census records show him still on the farm so it seems he must have purchased the farm from the John Burnside.
Isaac (174)(175)(177)lived and worked as a farmer in Hampshire County through at least 1920. In the (178)1930 Census he is living on a farm in Mineral County, West Virginia with his nephew Harry Whitacre and family. Arsilva is found (199)living with her daughter Ethel Grace (Abe) Kidwell in McClean, Fairfax County, Virginia.
Margaret Arsilva died on February 18, 1948 and was buried in the Bethel Methodist Church Cemetery near Paw Paw, Hampshire County, West Virginia. Records found list her name as Margaret, Margaret A. or Arsilva. For some reason her headstone is engraved as "Arsilva J.".
Isaac Franklin (176)passed away on May 16, 1961 at the age of 90. He died at Hampshire Memorial Hospital in Romney, West Virginia of Congestive Heart Failure. He had been living in the Levels, West Virginia area at that time. The person giving the information for the death certificate was a Charles Snyder. It is unknown which Charles Snyder this really is and if "Frank" was living with him. His niece was married to Charles Andrew Snyder and they had a son named Charles Leo.
Isaac Franklin was also buried in the Bethel Methodist Church Cemetery near Paw Paw, Hampshire County, West Virginia. A son, John Franklin Abe, and a daughter Ada Elizabeth (Abe) Cowgill are also buried in the same cemetery.