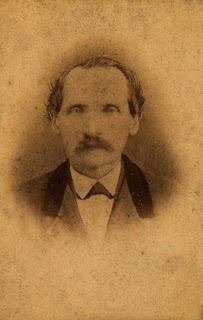 Augustus "Gustus" Abe was (1)(2)(3)(4)born in 1826 in Germany. He was a young boy of about 10 years of age when the family emigrated from Germany. Gustus was the son of John Adam and Annie Catherine Abe. He never married nor had any children.
The (3)1850 and (4)1860 Censuses for Hampshire County, Virginia, show him still living and working on the family farm.
Augustus served in the 77th Regiment of the Virginia Militia prior to the outbreak of the Civil War. This small militia group, mostly from Hampshire and Hardy Counties in Virginia, was later absorbed into the 11th Virginia Cavalry as Company D. August is not listed with any actual Civil War Military unit so I believe he discontinued service when the militia group was absorbed. He probably discontinued military service because of his age. He would have been about 35 at that time.
His life changed considerably over the next ten years. His father has passed away in 1866 and the (7)will disposed of the family farm to Nicholas and himself (see John Adam Abe, blogs 10-002 and 10-003). "Gustus",  within two years, sells his portion of the farm to Nicholas and purchases his own farm. The deed for his farm purchase was dated in December 1868. Here in the (5)(9)1870 Census for Mineral County, West Virginia, he is now living in a different household some distance away with his mother. They appear on Page 8, Dwelling 55 of the census and Nicholas (and the Abe Farm home place) are listed on Page 11, Dwelling 78. As discussed in the John Adam Abe Will, "Gustus" is charged with taking care of his mother for the rest of her life. As seen here Annie Catherine is now living in "Gustus" Abe's household.
The (16)property was purchased for $800.00 from Joseph and Rebecca Pancoast of Philadelphia, Pennsylvania. See the transcribed version of the deed that follows:

The (17)1880 Census for the Frankfort District of Mineral County, WV and dated June 14, shows Augustus Abe now living by himself. His mother died in 1876.
In (18)1898 Gustus Abe writes his will as follows:
Gustus Abe Will
Recorded in Will Book No. 1 Page 4 N and C
Keyser, West Virginia, County Courthouse of Mineral County, West Virginia.
Know all men by these presents, that I, Gustus Abe, a citizen of Mineral County, West Virginia, being in ill health, but of sound and disposing mind and memory, do make and publish this my last will and testament.
And as to my worldly estate of which I shall die seized and possessed or to which I shall be entitled at the time of my decease, I devise and dispose thereof in the manner following, to wit:
1. I direct that my body be decently interred and a set of tombstones, the cost of same to be from forty to fifty dollars, with suitable engravings, to be set to my grave.
2. That all my just debts and funeral expenses shall, by my executor, be paid out of my estate, as soon after my decease as shall by him be found convenient.
3. That each person who shall engage in digging my grave, shall receive the sum of $2.50 for his services, but the total amount of digging the grave shall not exceed $10.00.
4. Next, I will the sum of fifteen hundred dollars ($1500.00) to J. W. Arnold, Taylor Arnold and J. W. Leatherman, trustees of the Beaver Run Church of the German Baptist Brethren, and to their successors. The said $1500.00 to be owned and controlled by the Beaver Run congregation, First District of W. Va., of the
German Baptist Brethren Church. I further will that the said $1500.00 be put on interest and only the interest accruing thereby be available for use, and that said interest shall be used for Home Mission work in the First Dist. of W. Va., and for the support of the poor at the discretion of said congregation.
5. That my executor, hereinafter named shall receive 5 per cent commissions on my entire estate for his services in settling up my said estate.
6. All the rest and residue of my estate of which I shall die seized and possessed, I will to be divided between and among my niece Mary Herrick, and my nephews, Philip Abe, Adam Abe, Frederick Abe, Jacob Abe and John Abe.
And lastly, I do nominate and appoint George S. Arnold, to be executor of this my last will and testament.
In testimony whereof, I, the said Gustus Abe, have to this my last will and testament subscribed my name and affixed my seal this sixteenth day of April, in the year of Our Lord, one thousand eight hundred and ninety-eight.
Gustus   X   Abe (seal)
Note: Gustus Abe’s signature is only a very shaky “X” as his mark. The writer of his will wrote his name around his mark as shown above.
Signed, sealed, published and declared by the said Gustus Abe as and for his last will and testament, in the presence of us, who, at his request and in his presence, and in the presence of each other, have subscribed our names as witnesses thereto.
Dennis Culp
John D. Culp
M. H. Duckworth
John D. Culp, M. H. Duckworth May 2, 1898
Note: John D. Culp and M. H. Duckworth signed the will again, as seen above, in the presence of the probate court. See clerk statement below.
In the Clerks Office of the County Court of Mineral County, West Va, In the recess of said Court.
On this 2nd day of May. 1898, a writing purporting to be the last will and testament of Gustus Abe, dec’d, late of Mineral County, West Virginia.bearing date the_16_day of April 1898 was presented in the Clerks Office of the County Court of Said County, for probate and record and was proven by the others of John D. Culp and M. H. Duckworth two of the subscribing witnesses thereto to have been signed acknowledged- published and declared by the said Gustus Abe in their presence as and for his last will and testament and that they at his request in his presence and in the presence of each other subscribed their names thereto; that at the time of so doing they considered him of sound mind memory and understanding and capable of executing a valid instrument, The said writing is therefore admitted to probate and record as the last will and testament of the said Gustus Abe, and George S. Arnold the executor therein is permitted to qualify upon his executing bond with good and sufficient security in the penalty of $4500, conditioned according to law.
Given under my hand this 2nd day of May. 1898.
(signed) J. V. Bell Clerk
-----------------------------------------------
Augustus "Gustus" Abe died on (1)April 28, 1898, just 12 days after he wrote his (18)will. He is buried in the (1)Long Cemetery in Short Gap, Mineral County, West Virginia with his parents and two nieces.


UPDATE:  Records for his service to the 77th Virginia Militia have now been added. Augustus Abe was released from service in the militia on December 31, 1861 as he had passed the age of 35. In most cases this was the upper age limit for military service.