John Abe is the son of John Adam Abe, and emigrated from Germany with his parents and brothers in the (6)1830's.
Very little is known about him. He fits in the birth time period of 1820 to 1825 shown in the (2)1840 Census for Hampshire County, Virginia. Here only sex and age groups of the spouse and children are listed. The head of household is the only person listed by name. John's birth place was in Germany.
The only confirmed record to date that mentions him by name is his father's (7)will. The will dated October  12, 1864, states that John Adam's son John is deceased and he has a grandson, Tieber.
I have a copy of  an estate sale that is possibly John's. The sale was handled by Nicholas Abe in 1849. Further investigation is needed to confirm the connection.
John Abe was believed to be married to a Mary Margaret and had two sons Frederick and Michael T. Abe. The (19)1860 Census for the Western District of Hampshire County Virginia lists Mary M. Abe and the two sons on Page 290 Dwelling 6.
Sometime between (19)1860 and (20)1870, Mary Margaret Abe remarried to a John Crawfis. A (98)"Maryland Marriages, 1866-1970" record on Family Search.org lists a John Crawfus and a Ann M. Abbe marrying on April 27, 1865 in Allegany County, MD. No physical copy of the record is available.
At some point between (20)1870 and (21)1880 John Crawfis dies.
The (21)1880 Census shows Mary living in the Joseph C. Lechliter residence.
The exact time, place and burial for John Abe, Mary Margaret and John Crawfis is unknown at this time.
Please see the post "John Adam Abe and Annie Catherine 10-002" for further information. 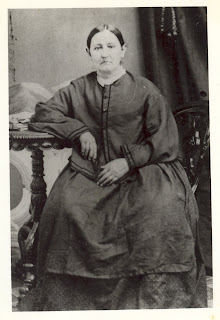 Mary Margaret
Posted by Michael Abe at 9:49 AM

Email ThisBlogThis!Share to TwitterShare to FacebookShare to Pinterest
Labels: Generation 2