With the death of his wife, Margaret, Adam may not have had any other choice then to return home to the farm. He would need some help with the three growing girls while he worked.
The (17)1880 Census for the Frankfort District of Mineral County, WV lists his wife as Martha J. Abe and they have a child of their own, Virginia L. Abe (7 months old). A record at the Allegany County Courthouse in Cumberland, Maryland shows Adam married Martha Jane Moreland on (50)October 3, 1876. The person performing the ceremony was (51)Rev. W. H. Reed. Rev. Reed was a pastor of the Kingsley M. E. Chapel (South Cumberland) from March 1876 to March 1877.
Scouring through Mineral County, West Virginia birth and death records have turned up a few bits of information. Virginia Lee was not the first child for Adam and Martha as recorded in the (17)1880 Census. An unnamed child is listed as born in (13)July 1877 and died on July 19, 1877. A second child (82)(83)Martha E. is found in the death records as deceased in 1878. The day of death is unreadable. Does this name sound familiar? If you remember, Adams first child by his first wife Margaret was named Martha Ellen. This won't be the last time the name is used and sadly, none of the three Martha E. named children lived to be a year old. 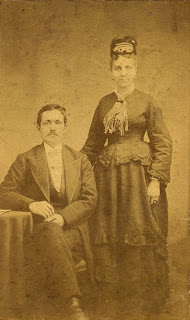 I cannot say with absolute certainty who Martha Jane's parents are. The (13)Abe Family Heritage says that she was the daughter of George H. Moreland. The (84)1870 Census for Hampshire County, WV shows a George H. living at Forks of Cacapon, WV that is a possibly her father. No wife is listed. He is listed with one son and four daughters. One daughter, Martha J., is fifteen years of age which would be about the correct age. There are a number of George Morelands living in Hampshire and Mineral Counties so further research is needed to confirm this record.
With the birth of the unnamed child in 1877, it would seem that Adam remarried within two years after the death of his first wife Margaret (Fulk). Also, all the above records point to the family living in Mineral County, WV. In (17)1880 he is shown as a farmer in Mineral County, WV and no longer working for the railroad. The area of residence seems to be along what is now Route 28 and near the Old Furnace Road. There are four children listed there: Lacy Ann, Isaac Franklin, Amanda Melvina (all from Adam's first marriage) and Virginia Lee who is seven months old. I am told that this Route 28 was called "Knobley Road" back then.
The above "unnamed" child and Martha E. are buried at the (13)Abe Cemetery in the Adam and Martha Jane plot. The names are inscribed on the monument for John Adam and Martha Jane. The "unnamed" child is listed on the headstone as "Our Babe". The headstone lists the above child, Martha E., as Ella M. We can't be certain which is correct. Also buried there is another child Emma, that was born and died in 1881. No other birth or death records have been found for her.
The (17)1880 Census for Mineral County, WV shows John Adam and Martha living somewhere along Route 28 near the intersection of the Old Furnace Road. Augustus Abe is listed at dwelling #116 which was at the intersection of Old Furnace Road and Route 28. John Adam is listed at dwelling #110. Their children listed here are Lacy Ann, Isaac Franklin, Amanda Melvina and Virginia Lee.
Census records leave a gap of information between 1880 and 1900. The 1890 records were almost entirely destroyed in 1921 by a fire in the basement of the Commerce Building in Washington D.C.
The (70)1900 Census places his residence in the Gore District of Hampshire County, WV. I don't have copies of his land record but John Adam had a farm in the Little Cacapon area for a number of years. In the book, (62)"A History of the Church of the Brethren in the First District of West Virginia", by Foster Melvin Bittinger (Page 78 "Old Furnace"), there is a mention of John Adam having a farm there in February 1896. The (17)1880 Census lists him in Mineral County, West Virginia. The (187)death record for the infant child "Emma" says she was born and died in Maryland but the record was recorded in Hampshire County, West Virginia. It is possible that this is the time period (1880-1881) that John Adam purchased the farm there.
Almost no information is available for Martha Jane. Her headstone says she was born in 1854 and died in 1890. She is buried at the (13)Abe Cemetery on the Old Furnace Road near Short Gap, WV. No birth or death record has been found for her.