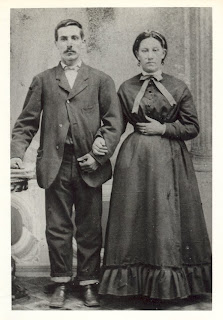 
This Frederick Abe is the second of three found in the second and third generations of the Abe Family. This Frederick was born in 1848 and spent a good portion of his life on the Abe home place that was located on the Old Furnace Road. His name is found in all of the census records from (3)(4)(9)(21)(24)(37)(38)1850 through 1920. Along with his brothers, he helped his father, Nicholas, to farm the home place. The property had been passed down to his father, from his grandfather, John Adam Abe.
Frederick was twelve or thirteen years of age when the Civil War broke out and he never entered the fight as his two older brothers did.
On (44)October 12, 1871, at the age of 23, he married Catherine Logsdon. From the information on her (13)headstone her birth is calculated to be October 24, 1851. I cannot find any definite records on her or her family. Her (41)death record is nearly unreadable but it looks like her parents are Thomas and Ann Logsdon. There was a Catherine Logsdon living in Allegany County, Maryland in 1870 and working as a "domestic" but I am not sure at this time if it is the same person. She gave birth to 4 children: Mary Ann, Frank Thomas, Nimrod and Martha Ellen. Frank Thomas lived just over two months and is buried at the Abe Cemetery. Catherine died on (13)(39)February 28, 1877, twenty five days after Martha Ellen’s birth on February 3. The child died at seven months of age on (13)September 4, 1877. She also is buried in the (13)Abe Cemetery.
Two years later in about (24)1879, Frederick remarried to Lucinda Spangler. Her (43)death certificate says she was born on August 16, 1847. The original (6)"Abe Family Heritage" says that they were on a farm on Knobley Mountain but I have no records to prove exactly where they lived. The (21)1880 Census shows them living a considerable distance from the Abe Farm. The Abe Farm is on Page #9 Dwelling #69. Frederick and Lucinda are listed on Page #22 Dwelling #165. This was probably on a farm along what is now Route 28. Lucinda had been married before and had at least one child. The (21)1880 census lists a son Albert R. Spangler with the family. Her (43)death certificate and (41)death record say her father was Joseph Dennison and mother listed as "don't know". In the (25)1900 Census Joseph Dennison is living with his granddaughter Lillie M. (Abe) Baldwin. Three children were born to Frederick and Lucinda; Lillie M., Hiram Nolan and Jacob.The last child, Jacob, died at the age of six years. It is not known what happened to Albert Spangler. He was living with the Frederick Abe Family until at least (37)1910 but he is gone from the (38)1920 Census.
In 1894, when his father passed away, Frederick received half of the farm by his (8)father’s will. The (24)1900 Census lists both he and his brother Jacob sharing the farm. By the (45)1910 Census his brother Jacob is shown living away from the farm. The location is very possibly the farm that "Gustus Abe", his uncle, used to own where the Old Furnace Church now stands. More on this later when we talk about Jacob Abe.
The last census record where he was recorded was in (38)1920 and he is still living and working on the farm.
Frederick died on  (40)(41)(42)February 24, 1929 and was buried at the (13)Abe Cemetery. His (42)death certificate says he was living in Dixie, WV (now Wiley Ford, WV) at the time. The cause of death was "La Grippe" (influenza).
Lucinda died on (43)December 23 of 1929. Cause of death is listed as "Chronic Myocarditis" (inflammation of the muscular tissues of the heart). The (43)death certificate says she was buried on December 25, 1929 (Christmas Day). Her burial was at the (13)Abe Cemetery. One final note, there is one confusing tidbit about her death place. The (41)Mineral County, West Virginia Death Records and her (43)death certificate say she died in Wiley Ford, West Virginia but for some reason the death certificate was issued by the State of Maryland.
Posted by Michael Abe at 12:11 PM