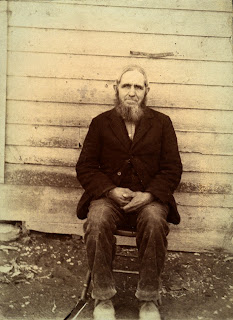 The war is officially over for John Adam. With his (34)parole from the 11th Virginia Cavalry on April 20, 1865, I'm sure that Adam was like any other soldier and only had thoughts of getting home. It would be familiar and comfortable surroundings. Someplace stable to set his roots back in the ground instead of constantly being on the move and not knowing what the next day would bring or if it would be his last.
The most likely route for John Adam to take would be to go west from New Market and then north and northwest up the valley to Moorefield and Romney into Short Gap. Just a few days on horseback and he would be home. A good plan, but we all know plans don't always work out as we expect.
From records found I think we can piece together the most likely scenario of events in his life.
The first census record for Adam after the war is the (69)1870 Census for Allegany County, MD. Here Adam Abe is married to a woman named Margaret and they have a one year old daughter, "Lacey". Also living in the household is another man Hiram "Folck". Both Adam and Hiram are listed as a "railroad repair hand". The census record is dated July 16, 1870. 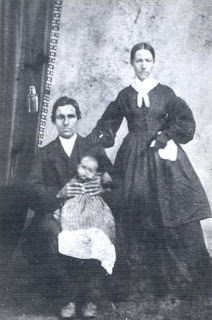 Who was this Margaret? The first record I have found to identify her is her daughter Lacy Ann's death certificate. There it lists her mother as Margaret Fulk, born in Rockingham County, VA.
Margaret Fulk was the daughter of Isaac and Melvina (Cherryhomes) Fulk. She was born about (78)July 22, 1843 in Rockingham County, Virginia. Her birth was calculated from information found on her her headstone. The (79)1860 Census for Rockingham County, VA says that the family was living in "District 1, Harrisonburg Post Office". Members in this household are Isaac and Melvina along with children, Catherine, Margaret, William, Ellen, Hiram, John and Asher. The (80)1870 Census lists the area as "Brock's Gap Township, Harrisonburg, VA Post Office". Here it lists Isaac, Melvina, John and Samuel. The (81)1880 Census lists the area as "Plains District" with Isaac, Melvina, John R. and Samuel A. living there.
Central voting places for Brock's Township were at the town of Fulk's Mill and Wittig's Store. They were located on or near both ends of what's known today as Brocks Gap Road. Wittig's Store was located in Dovesville, VA (now known as Bergton, VA).This road was the central passage east and west across the area.
In the Mineral County Birth Records we find on (82)September 16, 1867 a child, Martha Ellen is born to John Adam and Margaret Abe. In the Mineral County Death Records, this same child dies on (83)May 25, 1868 of "Fits" (seizures). It is uncertain where the child was buried. (UPDATE: This first child is believed buried in the Abe Cemetery where he and his second wife are buried.) Three other known children are born to them; Lacy Ann, Isaac Franklin and Amanda Melvina.
On April 17, 2010, I made a trip to Rockingham County, Virginia in search of where Margaret was buried. I stopped by the Brock's Gap Heritage Days exhibit at the Fulks Mill Elementary School. From there I was directed to the cemetery a couple miles west. The cemetery sits behind a house along Brock's Gap Road. The (78)Fulk-Fawley Cemetery has many graves marked only by field stones with no markings. There I found Margaret's headstone, the only "original" commercial headstone in the cemetery. The exact location of the grave could not be determined. The headstone and foot stone were broken off and leaning against a tree. The stone read "Margaret G. wife of Adam Abe". This really was the area of Virginia that Margaret was from.
So how did a man from Mineral County meet up with and marry a woman from Rockingham County Virginia about 75 miles away. Keep in mind this was the middle 1860's where there was limited modes of transportation; horse, stagecoach and railroad.
I am inclined to believe that John Adam met up with Margaret on the way home from New Market, VA after his (34)release from the Civil War on April 20, 1865. Maybe fate would have it that he stopped off at a farm house the very first night and it just happened to be where Margaret lived. The area he would have traveled would fit, as well as the time period. Brock's Gap Road would be the closest and most likely road to travel to the valley west of the Appalachian Mountains which would lead him north to home in what is now Mineral County, WV. The time period is correct with a window of about eight months between his release from military service and the approximate time of his marriage. This would leave nine months till the birth of their first child, Martha Ellen, if Margaret conceived right away. The window would be smaller if she didn't.  All four known children were born in Mineral County, WV so they either lived in Mineral County or close by. With the (69)1870 Census showing them living in Cumberland, Allegany County, MD it is possible that Margaret could have been taken to the Abe Farm when she neared the time to give birth. The farm was about 9-10 miles away. 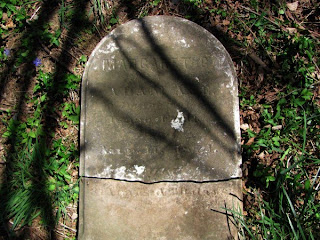 (See below for headstone information)


It hasn't been determined when he started working on the railroad. What's interesting is that Margaret's younger brother Hiram is living with them and working on the railroad in (69)1870. Did he start work on the railroad around the time he married Margaret or did Adam bury the first child in the Rockingham County Cemetery and connect up with Hiram and the railroad then? (UPDATE: This first child is believed buried in the Abe Cemetery where he and his second wife are buried.) If he was always a railroad "repair hand", this would also explain his movement from Rockingham County, VA to Cumberland, MD. He would be following the tracks doing repairs as needed.
Cousin, Ronald "Shot" Abe, uncovered information in Martinsburg, Berkley, WV that shows John Adam built a very small house there. It is most likely the family only lived here a very short time with all children being born in Mineral County, WV. The marriage record for John Adam and Margaret's daughter, Amanda Melvina, lists her birth place as Berkley County, West Virginia so this would put the family there about 1872. 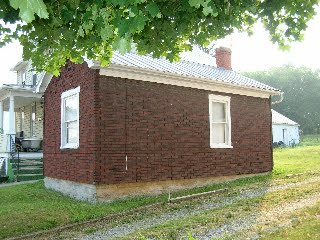 
Almost nothing is known about Adam and Margaret after 1870. The (13)1982 "Abe Family Heritage" says that Margaret died giving birth to their last child. The last recorded child for them was Amanda Melvina, born in 1871. No death record has been found but Margaret's headstone says she died on July 10, 1874. If she did die in childbirth there may now be two children buried with her in Rockingham County, VA. No record of the death of this second child has been found. Maybe because of complications in childbirth, the child was never born.
(78)Margaret's headstone reads as follows:

After the death of Margaret, Adam is found living in Mineral County, West Virginia.