Philip Abe was born the first son of Nicholas and Lacy Ann (Long) Abe on (15)May 21, 1843 on the Abe Farm in Mineral County, WV. From information we know at this time, he was the first child of the John A. Abe line born on American soil. His name is first found in the (3)1850 census. He grew up living and farming on his grandfather and father's farm until (33)(34)October 15, 1862 when he enlisted in the 11th Virginia Cavalry of the Confederate Army. He had already been a member of the 77th Virginia Militia (a local military group). Twenty five members of this group were incorporated into the 11th Virginia Cavalry, in the early part of the war.

The original (6)"Abe Family Heritage" published on 1982 says that he married a "Polly Hamilton". The (22)1870 Census lists her as "Mary". The (35)birth record for their son, Edward Randolph, also lists her as "Mary". Edward's (36)marriage record calls her "Pollie".  The (22)1870 census says she was born in Maryland but I have not been able to find out where. Philip apparently married soon after being paroled from military service on 4/19/1865 because on July 29, 1866, a son , Edward Randolph was born. Edward's (35)birth record says he was born in Mineral County, West Virginia so the family possibly lived on or near the home place for a short time. The (22)1870 Census for Allegany County, Maryland shows the family living in the Flintstone area.
A deed found at the Allegany County Courthouse in Cumberland, MD shows that Philip and Annie (201)purchased a property lot in Shriver's Addition in South Cumberland on October 5, 1874 for (210.00) two hundred and ten dollars. The property was purchased from Anthony J. and Mary Shriver.
The original (6)"Abe Family Heritage" book also says that Mary died in 1878 when Edward was about 12 years of age. No death records have been found.
About 1879, Philip remarried to Annie Elizabeth Largent from Little Cacapon, West Virginia.  On (23)June 11, 1880 the Census for Allegany County, Maryland shows the family living on German Lane (now Third Street) in Cumberland, Maryland. Their first four children were born there.
The (32)Warren Glass Works began operations in South Cumberland in 1880 and Philip worked there for a period of time as a glassblower. The factory was located between Queen Street and the railroad tracks and was in operation until 1888 when the factory was moved to Uniontown, PA.
Fifteen children were born to this union: Laura Victoria (1880-1951), Herbert Ashby (1881-1970), Joseph Hampton (1882-1949), Grover “Cleve” Cleveland (1884-1968), Cora Bell (1886-1948), Harmon Seefers (1887-1939), Alfred A. (1889-1889), Walter T. (1890-1992), Maurice “Morris” (1891-1892), Gertrude 1893-1893), Clayton (1894-1976), Myra Elinor (1896-1978), Missouri Forest (1898-1947), Florence I. (?-1901) and Bessie May (?-?).
Around 1885 Philip had to quit glassblowing because of glass dust build-up in his lungs. It was also around this time that he and Annie (201)sold the lot in Shriver's Addition. The lot was sold to Sarah A. House and  William Siebert as joint owners for the sum of (500.00) five hundred dollars on April 11, 1885.
It seems that Philip and Annie were now living in Alaska (now Fort Ashby), Mineral County, West Virginia for a short time because their fifth child Cora Belle was listed as born there. Philip would soon  purchased a 160 acre plot of land from Col. John Armistead Robinson. This would have happened before (30)February 1889 when Philip and Annie's one month old child, Alfred was buried on the farm. The property joined the original Abe Home Place on the Old Furnace Road. He farmed there until his wife Annie Elizabeth died on (29)April 27, 1914. (30)She was buried on the farm where six of their children were already buried. In 1918 he sold the farm to his son Harmon. In (27)January 1920 the census for Mineral County, West Virginia lists Philip as living with his son, Joseph on Knobley Road.
The Mineral County Death Records say he (28)died on April 30, 1920. His headstone says the death day was April 29th. At the time of death he was 76 years of age and was buried with his wife and six children on the farm. 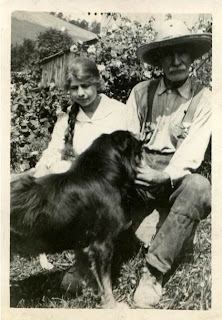 Philip Abe and his dog “Shep”

The girl is Clara Willard a friend of Philip’s daughter, Cora Belle
The farm spring house is in the background
Picture was most likely taken around 1910.


(31)Philip Abe's Will
I, Philip Abe of Mineral County West Virginia being of sound and disposing mind do make and publish this my last Will and Testament.
First and principaly I comit my soul into the hands of Almighty God, and my body to be decently buried at the discretion of my executor hereinafter named, and after my debts and funeral expenses are paid, I give and bequeath as follows:
To my son Edward R. Abbe I give and bequeath the sum of five dollars
To my son Joseph H. Abbe I give and bequeath the some of five dollars.
All my remaining property I give and bequeath in equal shares to my children named as follows:
Herbert A. Abbe, Grover C. Abbe, Harmon S. Abbe, Clayton Abbe, Laura Branson, Cora Poffinburger, Mira V. Abbe, Missouri Abbe and I hereby appoint Herbert Abbe and David Branson as the executors will power of sale of this my last Will and Testament in testimony whereof I have hereunto signed my name and affixed my seal on the 19th day of April 1920.


Signed, sealed and declared by the above named testator, as and for his last will and testament in our presence, who in his presence and the presence of each other, have signed our names as witnesses thereto.

Notes:
No spelling has been corrected in will.
Photograph taken of will did not allow viewing of bottom part of will.

In Civil War Record above, Frederick and Michael T. are cousins to Philip, not his brothers.