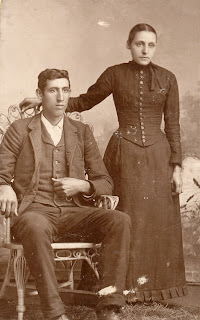 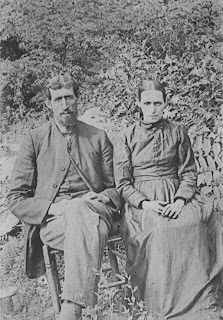 Lacy Ann Abe was born the second child of John Adam and Margaret G. (Fulk) Abe. A birth record for her has not been found but we can find clues in a number of records to narrow it down. The (69)1870 Census lists her as one year old and living in Cumberland, Allegany County, Maryland. Her birth place was listed there as Maryland. All other (17)(167)(168)(169)(170)census records list her birth place as West Virginia. In (17)1880 she is eleven and living in the Frankfort District of Mineral County, West Virginia. The (167)1900 Census says she was born in April of 1869 and all others place the year at about 1869. The date of enumeration for the (170)1930 Census is April 24 and she has already passed her birthday so she was born somewhere in the first 23 days of April. The (6)"Abe Family Heritage" book puts her birthday as April 11, 1869. No other record has been found to give the exact day.
Lacy's mother, Margaret (Fulk) Abe,  passed away on July 10, 1874 when Lacy was five years of age. Two years later her father remarried to Martha Jane Moreland. From this point on the family lived in Mineral County and Hampshire County, West Virginia.
While in Hampshire County, Lacy Ann met and (172)married Alpheus Jerome "Bud" Whitacre on March 25, 1897. A. J. was (62)born near Okanoko, West Virginia on September 30, 1869. For several years they set up housekeeping in that area with farming as their living. (62)(172)Benjamin W. Smith (the minister who married them) had been holding church services at the Abe Schoolhouse on the Old Furnace Road since 1897. It was through this association that A. J. and Lacy Ann later moved to Mineral County where they set up a Sunday School Class in the schoolhouse. The book (62)"A History of the Church of the Brethren in the First District of West Virginia" says that they moved to Mineral County in November 1897 but the (167)1900 Census shows them still in Hampshire County. They are not shown in Mineral County until (168)1910 where the family is still farming for a living. (62)They would live and serve in this county for the rest of their lives.
An official (62)church congregation was organized at the schoolhouse on August 10, 1912 and A. J. Whitacre was elected to the ministry. One year later the first church building was erected and became known as the Old Furnace Church, named after the iron furnace that sits across the road. Land for the church was donated by Jacob Abe, Lacy Ann's uncle. In 1916, A.J. was elected as an elder of the church.
(62)The United Brethren Church near Wiley Ford, West Virginia was having problems since a fire destroyed the schoolhouse where services were being held. In 1924 A. J. sold his farm and moved there to begin a Sunday School. In April of 1927, A.J. was asked to take over the church congregation and served as pastor for a while. The congregation later became known as the Wiley Ford Church of the Brethren. Both A. J. and Lacy Ann served in the church until about 1936 when they moved in with their son, Jesse, in Short Gap, West Virginia. Three of their sons, Joseph, Jesse and Howard also served as ministers in Brethren churches during their lifetime.
(173)About three years later Lacy Ann suffered a stroke. Five years after that, on December 8, 1944, she passed away of heart failure, after about 10 days with pneumonia. Alpheus Jerome (6)died on November 8, 1955. Both are buried at the Abe Cemetery.