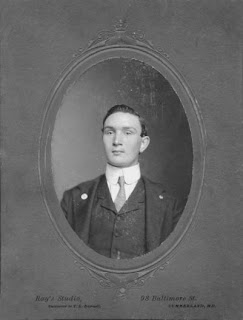 Herbert Ashby was (99)(100)born on October 22, 1881 in Cumberland, Allegany County, MD, the second child and first son to Philip and his second wife Annie Elizabeth (Largent) Abe. At the time of his birth the family was living in (23)Cumberland on German Lane (now Third Street). Herbert's parents soon moved from Cumberland, Maryland to the Old Furnace Road in Mineral County, West Virginia and purchased a farm that was next door to the original home place (about 1885).
On March 27, 1905, a (102)marriage license was applied for in Mineral County, West Virginia and on March 29, 1905 Herbert Ashby married Annie Elizabeth Gloyd. Herbert and Annie likely met on one of his visits to his Uncle John Adam's farm in Hampshire County, West Virginia. Annie was living just two doors away on (101)Adam Kayler's farm (her grandfather). Annie Elizabeth was (101)born in October 1887 in Hampshire County, WV. At the present her parents are unknown. In the (101)1900 Census she is found living with her maternal grandparents in Hampshire County, West Virginia. After their marriage, Herbert Ashby seems to have taken over the Kaylor Farm. In the (104)1910 Census for Hampshire County, Herbert is listed as the head of the household (also a farmer) and Annie's grandparents are living with them. This census lists Adam and Mary Kaylor as Herbert's father-in-law and mother-in-law instead of Annie's grandparents. Since she was pretty much raised by them I guess they were more parents then grandparents to her. In the (104)1910 Census they have two children listed (Ashby Philip and Cloe Elizabeth).
The (105)1920 Census for Hampshire County, West Virginia lists them living on "Ridge Road". They now have two more children; Deskin Woodrow and Alma Ruth. There were two other children born before Deskin, but both died young. Nellie Lee was (6)born on February 8, 1911 and (6)died on February 14, 1912. Violet Virginia was (6)born on April 9, 1913 and (6)died on July 26, 1913
In the (106)1930 Census Herbert is still working the farm in Hampshire County, West Virginia. He and Annie now have four more children; Alma Ruth, Hilda Naomi, Ina June and Lena Dove. The oldest two children, Ashby Philip and Cloe Elizabeth have now married and left home.
I have now verified that Herbert and Annie are laid to rest at the Little Cacapon Primitive Baptist Church, southwest of Paw Paw, West Virginia. Children Nellie Lee, Violet Virginia, Deskin Woodrow and his wife Alma Opal are also buried there. 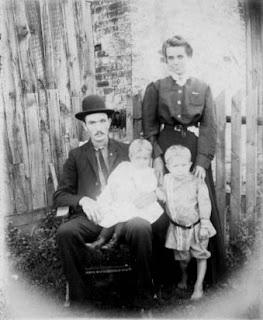 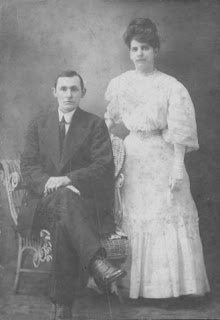