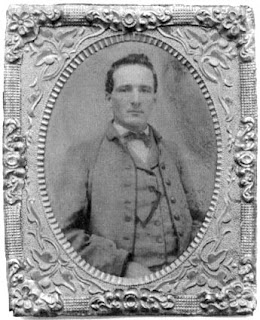 Edward Randolph Abe was (35)born July 29, 1866 in Mineral County, West Virginia just over a year after the end of the Civil War. He was the only child of Philip Abe and his first wife Mary "Pollie". Almost nothing is known about his mother but an (6)"Abe Family Heritage" story says that her name was Mary Polly Hamilton and that she died about 1878 when Edward was 12 years of age. His father remarried in 1880 to Annie Elizabeth Largent.
(22)In 1870, Edward is living in or near Flintstone, in Allegany County Maryland with his father and mother, Mary. At that time he is three years of age.
(23)By 1880 he was now living in Cumberland, Allegany County, Maryland on German Lane (now Third Street). The family consisted of Philip, Annie and Edward who was now listed as fourteen years of age. Both he and his father were listed as laborers. It is believed that his father was working in the glass factory at this time, so it is possible that Edward spent time working there also.
Because of the loss of the 1890 Census records to a 1921 fire we can't trace his travels during this time period, but (36)on April 26, 1895 he marries Minnie M. Hinkle (or Hinckle) of Morgan County, West Virginia. At that time Edward was living across the Potomac River in Brunswick, Maryland (Frederick County). His marriage record lists him as a railroader. Minnie is listed as born about 1871 in Frederick County, Virginia.
(90)On June 13, 1900 the Frederick County, Maryland Census lists Edward and Minnie living in Brunswick, Maryland. Edward is still working for the railroad and is now a conductor. They now have been married for five years and are now graced with their first child, Eva P., who was born in February and is listed as 3 months of age.

From this point on the information gets a little confusing and uncertain so bear with me. It would help to follow along with a copy of the records. None of what I have, from here on, can be considered the final word but I am including it for research purposes only. If anyone can possibly verify or disprove these records please let me know.

O.K. here we go. The first record is a (91)1910 Census (dated April 28, 1910) for the Election District #4 (Part of Ward 6) of the City of Cumberland, MD. On Sheet #19 Lines 80-87 Dwelling 438 there is an Edward Abbey, his wife Minnie and two children Eva and Leann. The age for Edward is 39 and is 4 years younger then it should be. The age for Minnie is also off by 4 years younger. The number of years they are listed as married (14) is a close match but should be 15 years (instead of 14) since the census was dated two days after their anniversary date. The oldest daughter Eva is listed as 10 years of age which is correct when looking back to the 1900 Census. The younger daughter is named Leann and  is listed as 7 years of age. I have not found anything further on this child which could also makes this record questionable.
With the next couple records, things begin to get even more interesting. I do know from talking with family members, who remembered Edward, that he lived in the Cleveland, Ohio area so that is where I have concentrated my search. Also, be very careful. There is at least one other line of Abes in Ohio and more then one Edward Abe. Most of these are direct immigrants from Europe.
The second record is a (92)1920 Census record for Cleveland, Cuyahoga County, Ohio. Here an Edward Abey is living on West Third Street which extends northwest from W. Superior Avenue to the Cleveland Browns Stadium on Lake Erie. He is listed as 53 years of age which would be correct since the census was taken in January and before his July birthday. He and his father are listed as born in West Virginia - this matches. His mother is listed as born in Maryland - this matches. This Edward is also working for the steam railroad as a conductor - this also matched previous records. Information that has changed is that he is listed as single and living in a rooming house. No family is with him.
To go along with this record, another (93)1920 Census record is a little to the west in Ottawa County, Ohio. In this record we find a Minnie Abey owning a home with no mortgage and is the head of the household consisting of her a granddaughter, "Neomi" Pettibone and a boarder, a 62 year old Dutchman named John Borgerman. This Minnie is listed as 45, which is four years younger then the age listed on her marriage record. Are we seeing a pattern here? Could the age on the marriage record be wrong by four years? "Neomi's" age is listed as one year and 8 months. From the handwriting I cannot tell if Minnie is married, divorced or single. It lists her birth place as Virginia which would be correct. Her occupation is listed as a nurse in a hospital.
In the (94)1930 Census for Cleveland, Ohio in Cuyahoga County we find a Minnie Abey at "1911 E. 79th Street". This is near the intersection of west bound Chester Avenue. Minnie is listed as 59 years of age. Guess what? Her birth year is back to 1871 as listed on her marriage record. She is listed as married and was 24 at the time she was married. The second person listed in the household is a 29 year old daughter, "Ava" Abey. The census record is dated April 3, 1930 so the age of this "Ava" is off by one year for a match with the daughter "Eva" in the 1900 Census. This "Ava" is listed as born in Maryland which matches "Eva" in the 1900 Census. Her father is listed as born in Ohio which would be incorrect and her mother born in Virginia which would be correct. "Ava" is listed as divorced. Both Minnie and "Ava" have an occupation listed as "none". The third person is a 12 year old granddaughter, "Norma" Pettibone. This is a close match with the granddaughter, "Neomi" in the 1920 Census record. Along with these family members are six other men, women and teens listed as roomers. Apparently this Minnie Abey is operating a boarding house.
The last unverified record is an (95)Ohio Department of Health Death Index that lists an Edward Abe who died in Cuyahoga County on October 9, 1924.
I have not found any Census records for 1930 that could be a possible match for Edward Randolph Abe.  A family member recalled that Edward and Minnie were at least separated in later years. It is unknown if there was a divorce. I have no further records on Edward, Minnie or their children and grandchildren so this is basically the end of this line for any records of this family that I have.
Posted by Michael Abe at 2:46 PM